In 1985 when I was walking south down Ave A near 12th Street and discovered a small shop that made baseball caps and embroidered names onto sports jackets.  Ben, the owner, had one lady working with him.  Next door to Ben was Moe, who sold sports equipment as well as iron-on letters and material.  I got Ben to make me a cap and went next door to Moe’s, where I got some iron on felt pieces and cut out a design that I ironed onto the front of Ben’s cap.  When I returned to visit Ben I discovered he had made back patches for the Savage Skulls, a Bronx street gang.  I put two and two together and asked Ben if he could embroider the panels going around a baseball cap.  He was reluctant at first, but after a little persuasion, he agreed to give it a try.

And so began the Clayton Cap.  The first caps were more like folk art, a little funky, but beautiful, I thought.  In 1986 Elle magazine picked up on the caps in their News Break section and that was it – the phone began to ring, and we were in FASHION.  A few months later Ben retired and I had to find an alternative way to produce the caps, which had become a way to make a living

Clayton and his wife Elsa, the duo behind the Clayton Cap. 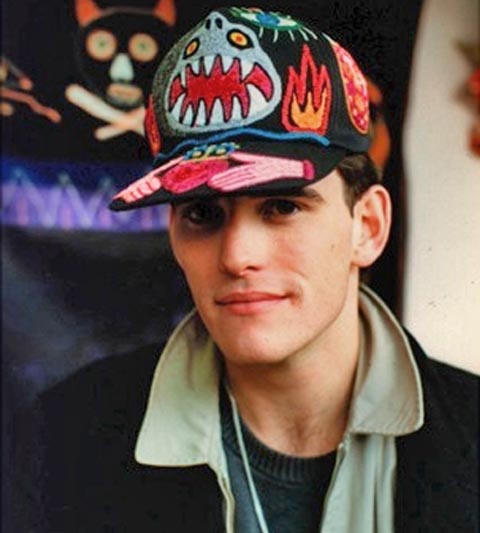 Clayton out in the wild capturing the lower east side.

The Clayton Cap changed the history of the American baseball cap. Previously, baseball caps were worn by workingmen or athletes.  The only embellishment was on the front panel: “Yankees, ” “Mets,” “Diesel Power” and so on.  Sometimes embroidered gold leaves were glued to the peak.  We were the first designer baseball cap makers to attach a hand signed brand signature label to one panel of our custom, one of a kind caps and to embroider our blue signature on our multiple design caps.  Because our caps are all hand made, they are all slightly different.  However, the biggest breakaway from tradition was to extend embroidery around the whole cap and on the peak.  Ours was a radical change to the baseball cap concept.  Our custom caps, each with an original design detailed to our customers’ desires, was made one at a time.  They were also hand numbered inside until late 2000.  We are still the only people in the world making these kinds of custom caps.

By 1986, the New York garment industry was being outsourced and sewing factories were closing.  By going to bankruptcy sales we bought all four sewing machines needed to make a baseball cap.  We also bought an industrial Bonnaz embroidery machine circa 1880   Elsa became a master craftsperson.  I designed the caps and she made them, contributing designs as well.

We had the freedom to do what we wanted with a simple item, transforming a symbol of American culture into something artistically mutable.  The hats became sculptures covered in my drawings.  We were the first to make unique embroidered caps in wool, some with a leather peak.  We also made them in plaid and pinstripes using all kinds of materials and material combinations that would not show up elsewhere for a few years. The Lower East Side also had a wide range of extraordinary fabric shops that sold ends of every fabric possible and at great prices.  A few such places were Belraf on Stanton St., Diamonds on Ave A, and Beckinstein’s on Orchard St.

Elsa and I are both artists who have survived as outsiders and on our own terms.  We had to find legitimate alternative ways to survive – and the caps made us a good living for a number of years.  I consider the caps to be works of art, an idea shared with several famous and well-known people who have been our customers over the years.  We have probably made over 300 custom caps for artists including Jim Dine and David Hockney and film personalities Gus Van Sant and Matt Dillon.  We also did a custom Clayton design jacket back for Mick Jagger.